Do you have friends or family that are hard to shop for this holiday season?  I know every year I have at least one person I can never figure out what to get them.

Gift baskets from MyBaskets is a fantastic idea.  They have a bunch of yummy baskets for Christmas. There are a wide variety of baskets at different prices for different occasions. The company is Canadian so you don't have to pay duty or anything extra like that.

I received the Merry Christmas And Happy New Year basket and I have to say I am very impressed.  There are sweet and salty snacks in it. I haven't tried them all yet but I have put some of the treats aside for when I am craving sweets.

This is the Merry Christmas And Happy new Year basket: 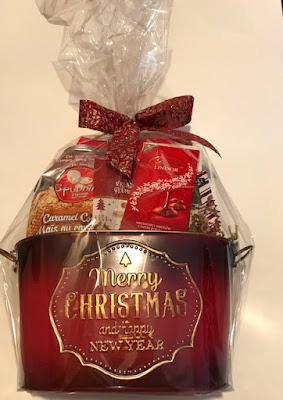 The following items are included in this festive Christmas gift basket:

FRENCH TRUFFLES: What gets better than a gourmet chocolate French truffle? This intense chocolate flavour will have your taste buds craving more and more of these little treats!
MILK CHOCOLATE BAR TRADITION: This made in Canada milk chocolate is surely the best milk chocolate that you have ever had! This milk chocolate is decadent, creamy, and it is truly such a great and rich bar of chocolate. This bar is a perfect addition to any snack table at an office party, or it makes a perfect gift as part of a gift basket for your recipient at work as well.
COOKIES: Don't let the size of these cookies fool you. These cookies might be bite-sized, but with their great oatmeal flavour and chocolate coating on its bottom, these treats are so tasty!
POPCORN: Light and airy pieces of popcorn meet sweet caramel. Spudniks caramel popcorn is such a tasty snack, you just have to try it!
CHOCOLATE ALMONDS: Caffe Latte almonds are new, award-winning, and your new favourite treat. That's right - coffee-coated almonds from Lamontagne are here!
LINDT CHOCOLATE BAR: Smooth and creamy milk chocolate bar from Lindor treat that all love to indulge in!
GHIRARDELLI: Chocolate and peppermint. A classy combination fit for everyone to enjoy during the holidays!
SAXON HOT CHOCOLATE: Make a nice hot glass of hot cocoa with this creamy mix of hot chocolate!

I have good news for you.  You can win your very own basket.  This giveaway is for Canada only


Christmas Basket from My Basket.ca
Posted by Chantale at Saturday, December 15, 2018 73 comments:

When a young nun at a cloistered abbey in Romania takes her own life, a priest with a haunted past and a novitiate on the threshold of her final vows are sent by the Vatican to investigate. Together they uncover the order’s unholy secret. Risking not only their lives but their faith and their very souls, they confront a malevolent force in the form of the same demonic nun that first terrorized audiences in “The Conjuring 2,” as the abbey becomes a horrific battleground between the living and the damned.

I do love a good horror movie and I did love The Conjuring so I was excited to see The Nun.

Unfortunately, I found this movie to be bland.  The story could have been way better and I really didn't find it scary or that creepy really.  I didn't even jump once.

I am very disappointed with this one. 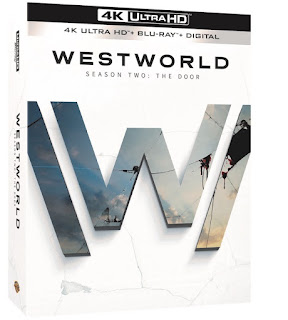 The gravity of a limitless world continues to pull fans in for the second season of HBO’s sci-fi hit series Westworld, nominated for 21 Emmy® Awards across a range of categories including Outstanding Drama Series. Today, Warner Bros. Home Entertainment is announcing Westworld Season 2: The Door is coming to 4K Ultra HD ($64.99), Blu-ray ($54.97 SRP) and DVD ($49.99) featuring all 10 riveting episodes plus exclusive immersive bonus features on December 4, 2018. Both the Limited Edition 4K Ultra HD and standard Blu-ray release will feature a Digital Copy of the series.
Westworld Season 2: The Door will also be available to own on digital July 23, 2018. Consumers can enjoy all 10 episodes in high definition and standard definition (retail $38.99/$28.99) along with never-before-seen bonus content.

In Season Two, viewers are welcomed back to Westworld, where the puppet show is over and the newly liberated “hosts” are coming for humankind. Dolores (Evan Rachel Wood) takes charge, Maeve (Thandie Newton) is on a mission and the Man in Black (Ed Harris) is back. Chaos takes control in this dark odyssey about the dawn of artificial consciousness, the birth of a new form of life and the evolution of sin.