The Edge of the Divine by Sandi Patty 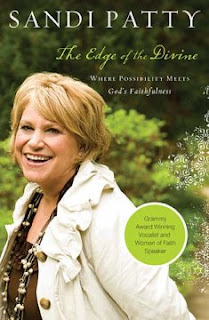 Award-winning vocalist, speaker, and author Sandi Patty uncovers the crucial decision every woman must make to leave a life of regret and find a life of freedom and joy.
Every woman reaches an unavoidable crossroads where she either spirals into a life of shame and regret or walks proudly in the freedom of God's grace and goodness. In The Edge of the Divine, Sandi Patty takes readers to the heart of the crucial choice to cling to the hope God gives.
Women discover that they can leave a life of wondering for a life of wonder. Wonder at the infinite love of God, at His inexhaustible mercy, and His refusal to let us wallow far from His blessings, hope, and grace. But first, as Sandi shows, women must walk to the edge of the divine and decide to jump.
My review
I must admit I have never even heard of Sandi Patty .
I don't really like giving bad reviews but sometimes it is a must. Don't get me wrong it is well writen and inspiring but I felt I was reading through her personal journal of her journey and learned more about her as a person and her family.  There were parts that were encouraging and she gave examples of God’s faithfulness through her various struggles. Unfortunately it wasn't interesting enough for me.
Disclosure:
I received this book free from Thomas Nelson Publishers as part of their BookSneeze.com book review bloggers program.
I was not required to write a positive review. The opinions I have expressed are my own.
I am disclosing this in accordance with the Federal Trade Commission’s 16 CFR, Part 255
Posted by Chantale at Monday, July 26, 2010 No comments:

Sorry I haven't been blogging much. I just haven't had the time to go on my laptop much lately.

On  July 15th we bought a puppy (see pic in last blog post) and  since then I have been busy with him. The first few days and nights were hell. Barely got any sleep and plus the first 2 days I really wasn't feeling well . I was feeling so bad that I barely even eat anything.

Last night was the first night since we got Azrael (our puppy) that I was able to get a decent nights sleep. And it is the first night he hasn't whined/howled after I have put him to bed.
Posted by Chantale at Tuesday, July 20, 2010 No comments:

A new addition to our little family 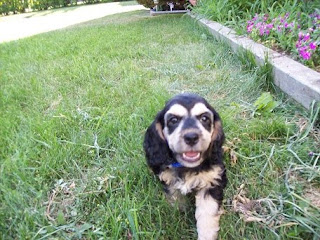 Winner of the $40 CSN Stores certificate is #30

Congrats to you. I will email you in a few minutes. You have  until Monday to reply back to my email. If I have not received a reply I will pick an other winner.
Cheryl on July 2, 2010 11:46 PM said...

We are trying to fix our 5 yr old a sweet little bed set up and I adore this bedding for her toddler bed. I would use the $40 toward the InStyle Hey Diddle-Diddle Three Piece Toddler Bed Set.
Posted by Chantale at Friday, July 09, 2010 1 comment:

Just got back online and found....

After a week of stress, frustration and being busy I finally was able to go online and I found out I got an award. This Sweet Blogger Award is from Bailey at I Know All The Words.  Thank very much. I feel special :)

The Rules are that I need to make a post about the award including the picture and who awarded it to you and then send it on to 10 other Sweet Bloggers.

On Friday we got the call saying that our belongings will be at our house on Saturday. We were so excited and happy to finally move into our own house that we bought.
Saturday the move in went smoothly.
Sunday afternoon we checked out of our hotel and then went to buy groceries. On that day we also spent the rest of the day unpacking some boxes.
Monday we had to be home for the phone company to come and connect the phone.. We waited and waited until 5 pm but still no phone. I called them and they said they will do it the next day.
Tuesday we waited and still no phone. By 5pm called again and the guy on the line said the phone should work now but of course it didn't work :-( also the guy said no one had this address had the telephone hooked up since 2006 so we asked to get a guy to come hook the house up with new lines. They said that someone will come over between 8AM to 12PM.
Wednesday we waited and waited and really were getting mad and frustrated. The guy showed up after 1pm to fix the phone line. Lucky enough all he had to do was fix it instead of putting in new lines. We are so happy about that since we really spent enough money this month as it is. On a good note though, the cable guy showed up a day ahead of schedule. On that day I also found out that my computer isn't working.. It turns on but it isn't reading anything. I have tried reformatting but it isn't even reading the CD-drives but it isn't really a big deal since that computer is old and I use my laptop 90 % more often
This morning I did some weeding in scorching heat. I was going to wait until it got a little cooler but it really had to be done. We finally have the internet in our house and I must say I was very excited about it. I do have a lot of emails to read and reply to and have to catch up on Facebook and Twitter. I was thinking of doing some vacuuming today but I think I will do that some other day because I really need to rest my back for a few days.
Tomorrow is Friday and as planned I will announce who is the winner. I really have no clue what time I will announce it since I will have a few things to do but I promise it will be announced before 11PM (eastern time) and I will email the winner before I post it on my blog.
We are all settled into our house .We still have a bit of organizing to do but we are almost done. It is amazing to see how much I got done without the Internet LOL. We still have to organize our kitchen a little bit better and I will have some gardening to do. Meeloo (our cat) is adjusting pretty well. She has been a little bit more affectionate since we moved into the house. James took a week off from work so that helped a lot.
During the few days of no Internet I was meaning on catching up on a lot of my shows but unfortunately i haven't have much time to do that. Hopefully I will be able to catch up soon. Also was meaning on doing some other stuff for my blog but I haven't had time to do that either.
I hope your week is going much better than mine.
Posted by Chantale at Thursday, July 08, 2010 4 comments:

Will be offline for a few days

Today was the day movers where at our new house to move all our stuff in :-)  I was so excited.  Our furnature all fit in the house. Even our stove fit.. We were so worried it wouldn't fit.

Tomorrow we are checking out of our hotel and unfortunately we do not have internet in our house yet and will not have it hooked up until at least Wednesday. We will most likely be busy getting everything set up until then anyways.

Do not forget that Friday is the day I will have a winner picked for the $40 CSN Stores certificate so make sure you enter by Friday.
Posted by Chantale at Saturday, July 03, 2010 2 comments: