*I received a copy of this album for my honest review.* 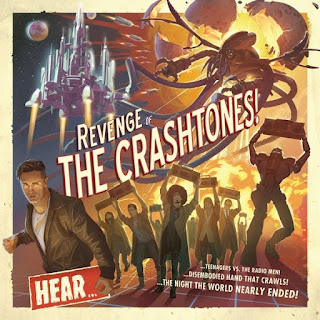 If you have been a long time reader you probably did notice I have reviewed a few (maybe about 5) music albums in the past. I do love music and yes I do listen to music pretty much every day and I do listen to a wide variety of music.  It really depends on my mood or what I am doing,

I have recently followed Sam Witwer on Twitter because I am a fan.  You may know him from tv shows like Battlestar Galactica, Being Human (the U.S. one),  Supergirl and voice actor in Star Wars Rebels and Star Wars Clone Wars.  Did you know he is also a musician/ singer and songwriter as well?  I didn't know until just recently.  He now has 2 albums out.

Here are the song titles

Guest performers include :
Timmy “Souldog” Hibben - All Percussion.
A.S.H. - female vocalist on “Arson”, “Daddy of Destruction”, “Base of Your Skull”, and “Lloyd Dobler”
Patrick Hallahan - Lead Guitar on “Seven ‘til Dawn”
And Glenn Howerton - Record Scratching with his Mouth on “It Came from a Man’s World”

If you are into Punk/Rock/ Alternative Meral I think you will absolutely enjoy Revenge Of The Crashtones. The music is unique.

I have listened to each song at least 3 times and I  actually liked all of them. Usually, there are maybe one or 2 songs on an album that I will only listen or actually like but I liked every song on this album.


I am giving Revenge of the Crashtones a 5 out of 5.

If you would like to listen to this album and purchase it you can do so at https://store.cdbaby.com/cd/thecrashtones2.

To find out more about Sam Witwer go check out his website: https://www.samwitwer.com/
Posted by Chantale at Friday, May 10, 2019 No comments: 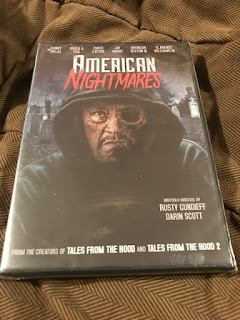 "Mr. Malevolent" (Danny Trejo) hijacks two millennials' computers and forces them to watch videos that reveal the consequences of various immoral crimes. Like "Tales from the Crypt" and "Tales From the Hood", "American Nightmares" is a star-studded, over-the-top horror experience that teaches you a lesson that you will soon not forget!

This movie is an anthology that is just messed up and I just couldn't even watch it all.  Some bad acting is in this movie and it looks like this one was a low budget one.

I really wasn't going to review this movie because I do not recommend it at all but I figured I would warn you all that this movie was horrible.

*I have received a copy of this movie for my honest review. *

Double Dragon roars to life with amazing special effects, spectacular action sequences, and a knock-about sense of humor. It's the year 2007, and what remains of L.A. is now ''New Angeles'', a city ravaged by earthquakes, tidal waves and vicious gangs. The evil tycoon Koga Shuko (Robert Patrick, Terminator 2: Judgment Day) is obsessed with finding the two halves of a talisman known as the ''Double Dragon'', which will give him awesome mystical powers. Two teenaged brothers, Jimmy (Mark Dacascos, John Wick 3) and Billy Lee (Scott Wolf, ''Party of Five'') find themselves in possession of the amulet's missing half, thrusting them into the adventure of their lives. With the help of Maria (Alyssa Milano, ''Charmed'') and her vigilante group ''The Power Corps'', Jimmy and Billy must summon all of their courage, resourcefulness and martial-arts skills to stop the villain's malevolent plan.
Crackling with the energy and humor of its two heroes, Double Dragon is a high-octane action spectacular. Buckle your seat belt and enjoy the ride!

This is available on Blu-ray for the first time in North America.

First of all, I want to say thank you to MVD Entertainment Group for sending this to me.

When my husband and I saw the cover art on the sleeve we both said it is awesome.
I remember watching Double Dragon back in the day (I believe I saw it on tv in 1995 or 1996) and I thought it was ok. I mean it was a movie from the 90's and it was just as cheesy as most of the 90's movies I have seen but back then I thought the movie was ok. I mean it was entertaining.

Now watching it I still think it is one of the cheesiest movies ever and I don't find the movie to be as entertaining as I remember it being but my husband thought it was entertaining.  He is a weirdo!

We do enjoy collecting old movies we have grown up watching though.


If you like collecting old movie then I do highly recommend this one.

I almost forgot to mention that this movie is based on the old Double Dragon video game.
Posted by Chantale at Thursday, May 02, 2019 No comments: