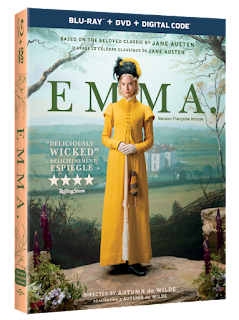 Jane Austen’s nineteenth-century comedy on misguided matchmaking and romantic mishaps gets a refreshing update in the heartwarming and witty EMMA., available on Digital May 5, 2020 and on Blu-ray™, DVD and On Demand on May 19, 2020 from Universal Pictures Home Entertainment. Hailed as “gorgeous, modern and authentic” (Stephanie Zacharek, Time), the wickedly funny film chronicles the privileged but well-meaning young Emma Woodhouse (The Witch and Thoroughbreds’ Anya Taylor-Joy). A vibrant visual treat, the Rotten Tomatoes Certified Fresh® EMMA., is “an unexpectedly timely sparkling romance” (Harriet Fitch Little, VOGUE), and features exclusive, never-before-seen bonus content including deleted scenes, gag reel, and behind-the-scene featurettes with the cast and crew whisking audiences away to the world of our mischievous heroine and the everlasting story of self discovery. Jane Austen’s beloved comedy about finding your equal and earning your happy ending is reimagined in this delicious new film adaptation of EMMA.. Handsome, clever and rich, Emma Woodhouse (Taylor-Joy) is a restless “queen bee” without rivals in her sleepy little English town. In this glittering satire of social class, Emma must navigate her way through the challenges of growing up, misguided matches and romantic missteps to realize the love that has been there all along. Autumn de Wilde’s feature debut EMMA. is “irresistible” (Justin Chang, NPR) and “the best adaptation yet” (Matt Goldberg, Collider), featuring a fresh and razor-sharp screenplay by Man Booker Prize winner Eleanor Catton (“The Luminaries”) that stays true to Austen’s endearing novel and brings to life the English Countryside in 1815. With an exceptional ensemble cast lead by Taylor-Joy EMMA. is rounded out by Johnny Flynn (Beast), Bill Nighy (Love Actually, The Best Exotic Marigold Hotel Series), Mia Goth (Suspiria), Josh O’ Connor (“The Crown”), Miranda Hart (Spy, “Call the Midwife”), Callum Turner (Fantastic Beasts: The Crimes of Grindelwald, “War & Peace”), Tanya Reynolds (“Sex Education”), Connor Swindells (“Sex Education”), Rupert Graves (“Sherlock,” A Room with a View) and Gemma Whelan (“Game of Thrones”). Accompanied by a joyous and energetic score by composer Isobel Waller-Bridge (“Fleabag”) and David Schweitzer, EMMA. is a stunning new vision of the groundbreaking literary classic on love and redemption. The theatrical version of the film is currently available for early viewing on a wide variety of popular on-demand services as a premium rental offering.

Ok I admit I have not seen any of the other movie adaptations of the book and I have not read the book so I can't compare to see how true to the book the movie is.

I had no expectations of this movie and I am surprised that I actually enjoy it.

This is actually entertaining, romantic and a little silly. I did have a few giggles.

I do recommend it. 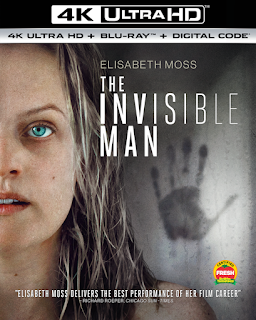 THE INVISIBLE MAN, an intense, modern-day psychological thriller, becomes available to own for the first time on Digital May 12, 2020 and on 4K UHD, Blu-ray™ and DVD on May 26, 2020 from Universal Pictures Home Entertainment. From iconic producer Jason Blum (Halloween, Split, Get Out, Us) and director Leigh Whannell (Saw, Insidious, Upgrade), this psychological thriller modernizes Universal’s shapeshifting, classic monster against a backdrop of an empowered woman facing her tormentor. “A cutting, contemporary work of socially conscious horror” (Peter Travers, Rolling Stone), THE INVISIBLE MAN comes home with never-before-seen bonus content.

THE INVISIBLE MAN follows a modern tale of obsession inspired by Universal’s classic monster character. Cecilia Kass (Elisabeth Moss) slowly begins to rebuild her life after the death of her abusive ex-boyfriend (Oliver Jackson-Cohen). But before long, she begins to question whether or not he is truly gone. In addition to the feature, THE INVISIBLE MAN delivers up twenty minutes of exclusive bonus content, including a chance to better get acquainted with the film’s leading actress: Elisabeth Moss, feature commentary with the writer/director and deleted scenes you won’t want to miss.

THE INVISIBLE MAN will be available on 4K Ultra HD, Blu-rayTM, DVD and Digital.

U.S. and Canada ONLY 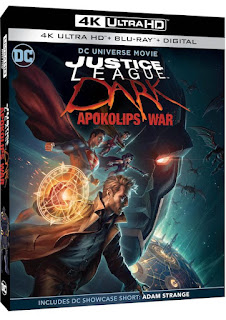 BURBANK, CA (March 4, 2020) – The World’s Greatest Super Heroes square off once-and-for-all against the despotic Darkseid – with the fate of all humanity hanging in the balance – in Justice League Dark: Apokolips War, the next entry in the popular series of DC Universe Movies. Produced by Warner Bros. Animation and DC, the feature-length animated film will be released by Warner Bros. Home Entertainment on Digital starting May 5, 2020, and on 4K Ultra HD Combo Pack and Blu-ray Combo Pack on May 19, 2020.

Justice League Dark: Apokolips War will be accompanied by the all-new DC Showcase animated short, Adam Strange. The thrilling tale, which offers insight into the space adventurer’s fascinating backstory, features Charlie Weber (How To Get Away with Murder) as the voice of title character.

Culminating a six-year animated journey that began with the release of Justice League War in 2014, Justice League Dark: Apokolips War finds Earth decimated after intergalactic tyrant Darkseid has devastated the Justice League in a poorly executed war by the DC Super Heroes. Now the remaining bastions of good – the Justice League, Teen Titans, Suicide Squad and assorted others – must regroup, strategize and take the war to Darkseid in order to save the planet and its surviving inhabitants. This is truly the war to end all wars, and only the victor will live to enjoy the spoils.

Justice League Dark: Apokolips War features the largest Super Hero cast in the history of DC Universe Movies with dozens of actors/characters spotlighted in a grand ensemble of talent reprising their roles from this six-year story continuum. Matt Ryan (Legends of Tomorrow, Constantine), Jerry O’Connell (Carter, Bravo’s Play by Play, Stand by Me) and Taissa Farmiga (The Nun, The Mule, American Horror Story) anchor the cast as Constantine, Superman and Raven, respectively – the triumvirate determined to assemble the forces necessary to lead humanity’s final attack. Alongside that trio are the long-running core of Justice League voices -- Jason O’Mara (The Man in the High Castle, Agents of S.H.I.E.L.D.) as Batman, Rosario Dawson (Briar Patch, Daredevil, Sin City) as Wonder Woman, Shemar Moore (S.W.A.T., Criminal Minds) as Cyborg and Christopher Gorham (Covert Affairs, Insatiable, Ugly Betty) as The Flash – as well as JL-adjacents Rebecca Romijn (X-Men, The Librarians) and Rainn Wilson (The Office, The Meg) as the voices of Lois Lane and Lex Luthor, respectively.

“Justice League Dark: Apokolips War is an epic story of supernatural proportions. A blockbuster, battle royale of a film filled with intense action and heartfelt emotions, serving up spotlight moments for our cast of unique characters,” said Mary Ellen Thomas, Warner Bros. Home Entertainment Senior Vice President, Originals, Animation and Family Marketing. “This incredible thrill-ride takes us to the edge of the DC universe and sets the stage for an exciting new chapter.”

Justice League Dark: Apokolips War will also be available on Movies Anywhere. Using the free Movies Anywhere app and website, consumers can access all their eligible movies by connecting their Movies Anywhere account with their participating digital retailer accounts.

Justice League Dark: Apokolips War is a fun, entertaining and action-packed animated film that I did enjoy.

I like the story and the animation is fantastic.

As you all know by now, my husband and I have been very big fans of these DC comics animation films.  We have watched every single one of them as soon as they have come out and will be watching all the future ones right away as well.

If you are a DC comics fan this is a must-watch.

I know I haven't been updating this blog much this year but I really haven't been receiving many things to review for a few reasons.

Reason number 1 is because of Covid-19.  Not many things have been going through the Canadian border and a lot of companies are either closed or not shipping to Canada so not many physical products have been coming to my house.  Luckily enough now with technology, some of the movies I get right now to review are all streaming online so at least I have a few things that I have been able to review.

Reason 2 is that in March we found out that we are moving. Really we should have the house on the market right now but we are told to wait so that is what we are doing.  We are supposed to be at our new location by July 13th but right now I believe that will change to later this year so because of the fact that we don't know when we will be able to move, I can't really accept many future products unless I know they will arrive at my house fairly quickly.

Speaking of moving, I have a few ideas snd I would love to review more home products (i.e. home decor, appliances, and such). I am thinking of also doing more food-related posts.   I do have a few ideas so stay tuned to this blog for all the changes I have planned.  Not sure when they will happen but I am hoping before the end of this year.

Anyway,  I hope you are all well. 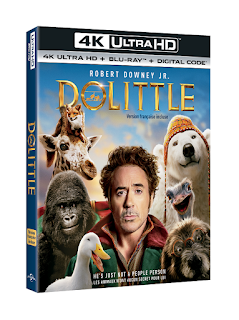