The Specs
The PSP Go is loaded with 16GB of flash storage, has a Micro M2 slot for expansion and, without a UMD drive, manages to be  smaller and  lighter than the original PSP. The 3.8-inch screen smaller than the PSP- 1000, but it runs at the same 480x272 resolution.

What I think of it
I played it for a while and battery life is just about the same as the other PSPs that I have  but mind you I do have the Extended life battery pack  in my PSP-1000 and PSP-3000. I also find that it is quieter than the others with the UMD drives in them. I have small(ish) hands and I sometimes thought the other PSPs were a bit to big for my small hands but with the PSP Go I don't feel as awkward playing it

I really liked mine and actually I like it better than my other PSPs because I like the fact that you store the games on your PSP or the Memory Stick Micro.Of course you can also save them on your PC or PS3. Plus if something ever happens to your computer, your PSP and/or your PS3 you can just log into your PlayStation store account and you can re-download the games without having to buy the games all over again.

I give this system two thumbs up.

Here are some photos of my PSP Go: 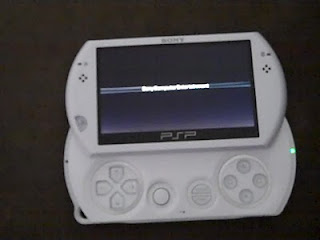