My Little Pony The Complete Series 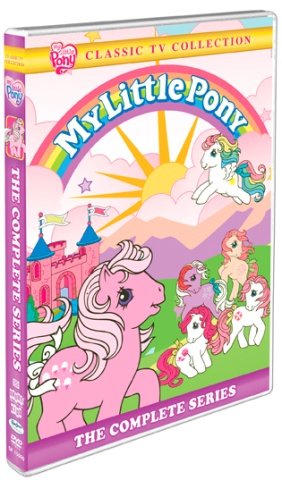 Get ready for lots of sunshine, rainbows, and happiness, pony-style! The original TV series that started the My Little Pony phenomenon is finally coming to DVD in its entirety. My Little Pony The Complete Series features all 65 episodes, and will be available September 30 in the U.S. and Canada from Shout! Factory Kids in collaboration with Hasbro Studios.

You’re invited to return to Ponyland, the home of all your favorite classic Little Ponies, including the Earth Ponies, Unicorns, Pegasus Ponies, Flutter Ponies, Sea Ponies, Baby Sea Ponies, their human friends Megan, Danny and Molly and, of course, their dragon friend, Spike! Together, they live a life of games, songs and harmony with allies like the Bushwoolies and Furbobs. But, occasionally, there are problems in Ponyland and the Little Ponies of Paradise Estate must face evil witches, goblins, Stone Backs, Grundles and more! Now you can join in the fun and adventure with My Little Pony: The Complete Series!

This is the original My Little Pony cartoon that I used to watch when I was a little girl back in the 1980's.  I used to love this cartoon so much and I had my mom to record it on VHS tapes for me.

This cartoon is a classic that children even now will enjoy .  I watched a few episodes yesterday and it brought so many good memories.

If you have a child who loves My Little Pony I think the classic My Little Pony would be a wonderful thing to give them this holiday.
Posted by Chantale at Friday, November 28, 2014