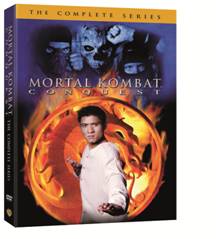 Forces of good and evil clash to determine who will claim victory in the fateful tournament as Warner Bros. Home Entertainment (WBHE) releases  Mortal Kombat: Conquest to own on DVD for the first time since the series debuted in national syndication in 1998.  Set to release in time for the debut of the franchise’s next entry in the video game series -- Mortal Kombat X – the original series hits shelves for fans old and new alike to relive the action. All 22 episodes from the first and only season are included in Mortal Kombat: Conquest, available on DVD for $39.98 SRP on March 31, 2015.

In a world scarred by destruction and violence, three fierce warriors face the wrath of an evil empire as they strive to protect the Earth Realm from the forces of darkness in "Mortal Kombat: Conquest." In this prequel to the critically-acclaimed movies, Kung Lao has triumphed in the Mortal Kombat tournament, defeating Shang Tsung and saving Earth Realm. Now, he must train a new generation of warriors for the next tournament. Meanwhile, an exiled Shang Tsung attempts to thwart Lao's efforts with the aid of supernatural warriors such as Scorpion and Sub-Zero.

“For decades, Mortal Kombat has proven its popularity past the video game realm into movies, an animated series and web series as well as this live-action television title,” said said Rosemary Markson, WBHEG Senior Vice President, TV Brand Management and Retail Marketing,. “We are thrilled to release Mortal Kombat: Conquest for the first time ever on DVD for longtime fans to relive the action as well as introduce new generations to the prequel storylines and events that took place prior to the video games and movies.”

Based on one of the best-selling video game franchises of all time; the Mortal Kombat video game series has sold over 30 million copies worldwide to date.