Two and a Half Men: The Complete Twelfth and Final Season On DVD *Review* 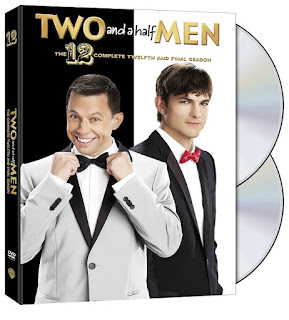 Season Twelve begins with an unexpected twist when single billionaire Walden Schmidt (Ashton Kutcher) suffers a mild heart attack on his way to a Halloween party.  Walden's brush with death causes him to reevaluate his life and he decides to become a father.  But after attempting to adopt as a single guy, Walden turns to his best friend/housemate, Alan Harper (Jon Cryer) for help, and Alan's dreams of living in the Malibu beach house forever come true when Walden proposes.  Walden and Alan convince their social worker that they’re a loving, albeit quirky, couple by day – while sneaking girlfriends out of the house by night.  Eventually, the guys welcome six-year-old foster child Louis (new series regular Edan Alexander) into their lives and all sorts of comedic exploits unfold as newlyweds Walden and Alan adjust to their new lives as co-parents, husbands and bachelors.  Everything seems perfect at the household for these two and a half men until they get a surprise visit from Charlie's widow, Rose, (recurring guest star Melanie Lynskey) and learn that Charlie Harper is alive.  Or is he?

I haven't been watching this show from the very beginning .  Heck the twelfth season is the only season I seen an entire season.  Not because the show is horrible but because I had other shows I wanted to watch more than this one.

Anyway,  I had watched a bunch of episodes from previous seasons before and I did find them funny and I did find this last season funny.It did keep me entertained but this show just isn't one of my favourites and it isn't one I would marathon or just watch just when I needed a good laugh. There are other comedies I prefer for that.

I know a lot of people who loves this show but personally it isn't one I can't live without and just have to buy the DVDs like some other shows out there.

I know one of my sisters loves this show so I will be giving this to her because I know she will enjoy this more than I do .