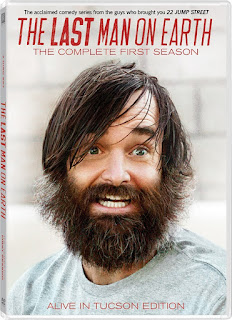 The year is 2020, and after a deadly virus has swept the planet, only one man is left on earth:
Phil Miller (Will Forte). He used to be just an average guy who loved his family and hated his job. Now, in his RV, Phil searches the country for other survivors. He has traveled to every city, every town and every outpost in the United States, Mexico and Canada, and has found no one. As he returns to his hometown of Tucson, Phil comes to the painful realization that he is almost certainly the last living being on the face of the earth. All he wants is for someone – anyone – to find him in Tucson – preferably a woman.

I admit I had not heard of this show until just about 2 months ago and I really wasn't interested in this show but my husband said he heard great things about it so I decided to give it a shot.

I am so glad I did.  This show is very entertaining and funny and addicting.   I popped the dvd in the PS3 and I figured we would just watch one episode or something on Sunday but we ended up watching the entire first disc and if it weren't for the fact there was a show on tv we wanted to watch we would have watched more epsides of The Last Man on Earth.

I give this show and this DVD 5 out of 5

You can now purchase The Last Man on Earth season 1 on dvd online and in stores near you.

US AND CANADA ONLY
Posted by Chantale at Tuesday, September 22, 2015