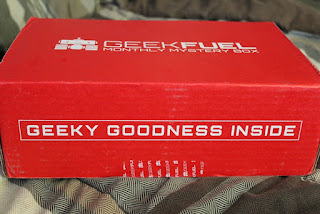 What is Geek Fuel? Geek Fuel is a subscription box in the geek and gamer category. What can you expect in the subscription boxes?  Geek Toys, Collectibles, Downloadable Games , T-Shirts, Action Figures ,Exclusive Movie Posters , Comics & More.

Here is the link to where you can find how much the subscription boxes cost .  Anyone who clicks through (and subscribed) using my link and subscribes to  receives a bonus item. 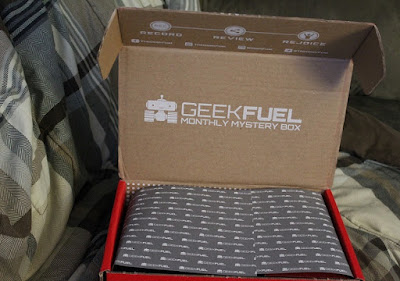 January's box was my least favourite so far.  I am not a fan of posters or pins. As you all know, I have been reviewing Geek Fuel boxes since January 2015. Usually in subscription boxes like these there are a few boxes I didn't like much but in the year I have been reviewing Geek Fuel boxes this is the first box I feel could have been much better.It is mostly because the t-shirt was one that I already have.