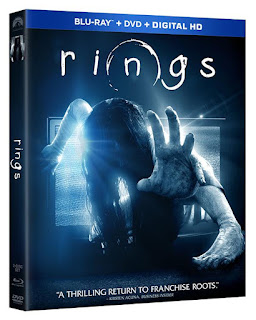 When a radical college professor (Johnny Galecki, "The Big Bang Theory") finds themysterious video rumored to kill viewers seven days after watching, he enlists his students ina dangerous experiment to uncover the secrets behind the Samara legend. When the deadlyvideo goes viral, they must figure out a way to break the curse and defeat Samara before herevil is unleashed upon the world. But, how do you stop her when she's everywhere? RINGSalso stars Matilda Anna Ingrid Lutz (Summertime), Alex Roe (The 5th Wave), Aimee Teegarden("Friday Night Lights") and Vincent D'Onofrio ("Law & Order: Criminal Intent").

The film is available now on Digital HD.
Posted by Chantale at Monday, May 01, 2017