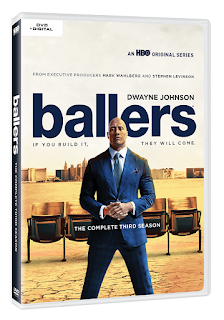 Delve deeper into the extravagant, high-stakes, big-money world of football when Season 3 of Ballers® comes to Blu-ray™ and DVD on April 3, 2018! From the producers who brought you Entourage, catch-up with Dwayne Johnson as retired football superstar Spencer Strasmore alongside an endearing assortment of colleagues, rivals, and pro-football clients in this HBO® hit comedy – which is also available now for Digital Download.

This season, Spencer, along with longtime colleague Joe Krutel (Rob Corddry), return with a new outlook and fresh goals, hoping to forge bonds with new players across the country while improving his relationships with existing clients. In an ever-changing business where the shelf life for stardom and multi-million-dollar contracts are short, Spencer is intent on proving that the key to successful sports management isn't just about making money and having fun – it's about delivering on the promises you make. John David Washington, Donovan Carter, and Omar Miller also return this season, with guest appearances by sports stars Stephen Curry and Eddie George.

I admit that I had never seen an episode of Ballers before I watched the first episode of season 3 just a few days ago.  I do like Dwayne Johnson so I wanted to give this show a try.