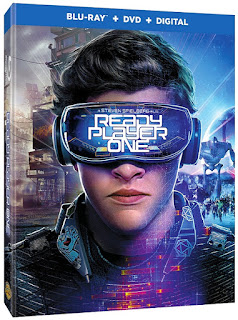 In the year 2045, the real world is a harsh place. The only time Wade Watts (Tye Sheridan) truly feels alive is when he escapes to the OASIS, an immersive virtual universe where most of humanity spend their days. In the OASIS, you can go anywhere, do anything, be anyone—the only limits are your own imagination. The OASIS was created by the brilliant and eccentric James Halliday (Mark Rylance), who left his immense fortune and total control of the OASIS to the winner of a three-part contest he designed to find a worthy heir. When Wade conquers the first challenge of the reality-bending treasure hunt, he and his friends—known as the High Five—are hurled into a fantastical universe of discovery and danger to save the OASIS and their world.


I read the book a while back before the movie even came out because it sounded interesting and then when I saw the trailer for the movie I was very excited about the movie.  Unfortunately, I did not get the chance to see the movie in theatres but I was so excited when I received the movie on Blu-ray, DVD + digital copy that I just had to start watching it right away.

I am so happy to have seen this movie. Of course, it wasn't completely accurate to the book and they did have to change some things and didn't have all the pop culture things in.  Even if they could have had the rights to have every pop culture mentioned in the book into the movie I think it would have been a little too much and I can't even imagine how much it would have cost the production company to get the rights for everything. It would be crazy.

Anyway, I am very happy with how the movie was.  The CGI was awesome and the acting was great. I loved the story.

This movie is one I will be watching again in the future for sure.