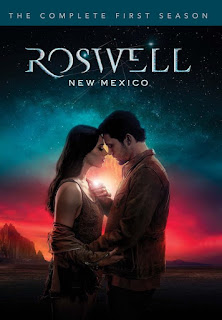 After a decade away from home, Liz Ortecho (Jeanine Mason) returns to her native Roswell to care for her ailing father. When she arrives, she reconnects with her high school crush Max Evans (Nathan Parsons) who is now a police officer. Their chemistry is electric, but Liz soon learns something shocking: Max and his sister, Isobel (Lily Cowles), and friend Michael (Michael Vlamis) are aliens who have kept their abilities secret their entire lives. As she and Max grow closer, Liz struggles to keep the truth from her best friend, Maria (Heather Hemmens), and her high school ex, Dr. Kyle Valenti (Michael Trevino). But concealing the visitors' true identities is more important than ever, as a long-standing government conspiracy and the politics of fear and hatred threaten their lives. Based on the Roswell High book series, Roswell, New Mexico is a love story, a relationship drama and the story of a small town...that happens to have aliens.

Ok, I admit that I had never watched the original show because I actually had never heard of the show until way after it had been cancelled.

When this new "reboot" was announced I was interested in at least checking out the show but unfortunately I had not had the chance to because I never remember when it plays on tv here and what channel.  Anyway, I was so happy to receive a copy of Roswell, New Mexico the complete first season on DVD.

I did enjoy this one. I actually watched all the episodes in a weekend because I just couldn't stop watching and now I wish I had watched the original show back in the day because I know I would have liked it.

The show is entertaining and got me hooked from the very beginning. I hope there will be  second season because I need more.

Roswell, New Mexico: The Complete First Season is now available online or in stores near you.
Posted by Chantale at Tuesday, January 28, 2020