The King of Diamonds by Simon Tolkien (book review) 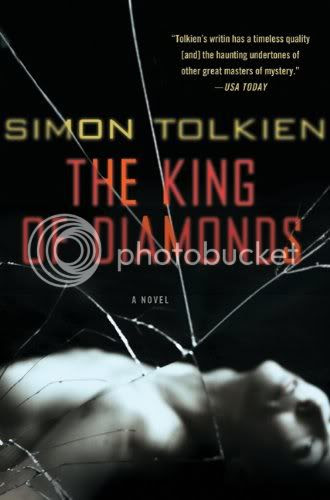 About The Author
Simon Tolkien was born in England in 1959 and grew up in a small village outside Oxford. His grandfather was J.R.R. Tolkien, professor of philology and the author of The Lord of the Rings. Simon was educated by Benedictine monks at Downside School, and then went on to Oxford University, where he studied Modern History at Trinity College. He was a successful barrister in London, specializing in criminal justice, where, according to British custom, he regularly appeared on behalf of both the prosecution and the defense. His wife, Tracy, is an American who owns a vintage clothing store in Kings Road, Chelsea. They have two children and live in Santa Barbara, CA

David Swain is two years into his life sentence for murdering the lover of his ex-girlfriend, Katya Osman. In the dead of night, he escapes from prison, and that same night Katya is found murdered in her uncle’s home, Blackwater Hall. Inspector Trave of the Oxford Police heads the manhunt for David, whom he first brought to justice two years earlier. But Trave’s suspicions lead him to Katya’s uncle, Titus Osman, a rich diamond dealer, and his sinister brother-in-law, Franz Claes, who has gone to great lengths to hide his former ties with the Nazis. However, Trave’s motives are suspect - Osman is having an affair with Trave’s estranged wife, Vanessa, and a newcomer to the Oxford Police, Inspector Macrae, is eager to exploit Trave's weaknesses to further his own ambition. Once David is captured and put on trial for his life, Trave is willing to risk everything that is dear to him—professionally and personally—to pursue his obsessive belief in Osman’s guilt

My Review
I think I may have a new book to add in my favorites pile. Simon Tolkien is a awesome writer. I felt like I was right there in the book and I could not put it down. It sure is a good thing I was stuck at home waiting for parcels and didn't have anything to do or else I  would have not wanted to go anywhere until I was done reading this book.If you are into mystery/thriller then I highly recommend this one.

The King Of Diamonds will be out in stores on March 15th 2011. In the meantime check out Simon Tolkien's webiste http://www.simontolkien.com/

*I have received a free copy of this book for my honest review.*

Email ThisBlogThis!Share to TwitterShare to FacebookShare to Pinterest
Labels: Simon Tolkien, The King Of Diamonds