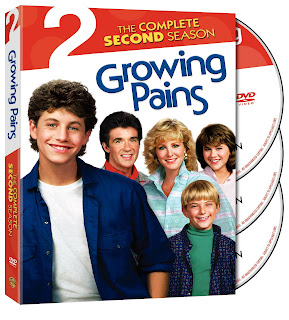 Synopsis:  Congratulations…you’re fired. Mike (Kirk Cameron) receives a car from his pleased parents after he’s named Employee of the Month. (So how’s he going to tell them he’s been canned?) Mike’s not the only one with secrets. Brainy Carol (Tracey Gold) wants everyone to think she has a romantic extracurricular life with a hunky football hero. And what’s up with 10-year-old Ben (Jeremy Miller) and those 67 calls to a sex line? (No, it’s not what you might think.) These events don’t all happen at the same time, but they do all happen at the same place: the Season 2 home-sweet-ho-ho-home of the Seavers – dad Jason (Alan Thicke), mom Maggie (Joanna Kerns), three on-the-grow kids. Jason works as a psychiatrist. You think maybe it’s time to add some family appointments to his calendar?
Available on DVD:       April 26th
Official URL:                http://www.growingpainsondvd.com
WBshop URL:               http://www.wbshop.com/Growing-Pains-The-Complete-Second-Season/1000181818,default,pd.html?cgid=&adid=WB_ADS_WBE_FB_GrowingPainsS2
My Review
Anyone else used to love this show? I remember watching this show when I was a kid and I watched every seasons. If I  couldn't watch it on the day it aired then I made sure I taped it so I would not miss the episode.

When I received the DVDs on Tuesday I couldn't wait to watch it. I have to say while I was watching it I remembered the episodes and they were just as good as I remembered.  There is no features to this but that is fine to me. It is still great and I know I will be watching it again at a later date. If you loved Growing Pains then I suggest you get season 1 and 2 on DVD.

Now hopefully we will not have to wait very long for the other seasons to be available.


*I have received free copy of Growing Pains: The Complete Second Season for my honest review*
Posted by Chantale at Thursday, April 21, 2011