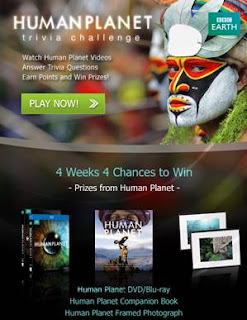 About Human Planet
Human Planet is the first BBC/Discovery Channel co-production to focus solely on human behavior.  Since premiering in the UK, the series has received overwhelming critical acclaim including The Telegraph proclaiming, “it’s like nothing you’ve ever seen before” and The Sun stating that it’s “visually stunning and utterly fascinating, this is seriously impressive stuff.”  From the makers of Planet Earth, Life and Blue Planet, Human Planet focuses on humanities amazing, complex and profound relationship with nature.  It weaves together 80 stories, many never told before, to illuminate humanity’s uncanny ability to adapt and live in every corner of our diverse world. Each episode centers on a particular habitat, and by using innovative and cutting edge filming techniques, reveals how its people have created astonishing solutions in the face of extreme adversity.
The Discovery Channel version will be presented by Charles Parnell and consists of six episodes that will take viewers to the farthest reaches of the globe culminating with, Life at the Extremes, a “best of” episode.  The Human Planet DVD and Blu-ray will include all eight episodes from the original UK broadcast version, presented by John Hurt, extending the home viewing experience with three hours of footage not seen in the North American broadcast.  It will include the episode, Cities, which will be exclusive to the DVD and Blu-ray.  Additionally, the DVD and Blu-ray will take viewers deeper into the heart of Human Planet with its set of ten Behind the Lens “making of” bonus features, and, exclusive to Blu-ray, a further “making of” feature called, Zanskar, accessible via BD-Live.  Zanskar showcases the astonishing life struggles of a resilient group of people living at the edge of the Himalayas.
Human Planet will debut on Blu-ray and DVD April 26th, just two days after the broadcast conclusion.  You can catch the series on the Discovery Channel Sundays at 8pm.  To support the series, BBC has launched an official Facebook page, featuring the new game Human Planet Trivia Challenge.  Challenge friends, race against the clock, and see if you have what it takes to top the leader board.  Each week we will be giving away incredible prizes including Blu-ray/DVD copies, framed photos, and award winning books.
One lucky grand prize winner will receive an amazing Human Planet prize pack!
Like Them  ON FACEBOOK AND PLAY TO WIN INCREDIBLE PRIZES!
How great is that?

If you are into this kinda of series than I suggest you go join up and who knows... Maybe one of you (my wonderful readers) may be a winner. If you do win please let me know and if you want you could be a guest poster and tell everyone on my blog what you won and/or what you thought about it.