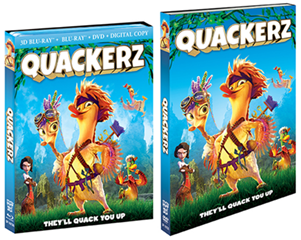 Get ready to spread your wings and wag your tail! On June 14, 2016, SHOUT! FACTORY KIDS invites families and kids to take flight with the highly-anticipated summer movie adventure, QUACKERZ on two-disc Blu-ray™ 3D Combo Pack(Blu-ray 3D and 2D, DVD and digital), DVD, iTunes and across all major VOD platforms.  The Blu-ray 3D Combo Pack allows viewers to enjoy this fun-filled animated feature on the platform of their choice and includes spectacular movie presentation on Blu-ray 3D, 2D and DVD. Catch QUACKERZ in select cinemas in Los Angeles on Friday, June 4, 2016.

When the peaceful island of the Mandarin Ducks is mistakenly invaded by the Military Mallards, a conflict flares up between the Mandarin Emperor and the Mallard Commander. Longway, the Emperor's son, and Erica, the daughter of the Mallard Commander, meet… and before long, a friendship takes wing. While their feathered fathers fight and egg each other on, the wicked Ms. Knout is con-duck-ting a scheme to destroy the sun. The kids will have to get all their ducks in a row to battle their foe… but waddle they do if her foul plan succeeds?

Come journey with us through this wondrous movie adventure that is filled with wholesome values, universal appeal and laugh-out-loud fun for the family. QUACKERZ emphasizes the importance of family, friendship, teamwork, respect, and acts of generosity and kindness.

I actually had never heard of this movie but it sounded like a cute and fun movie.

This movie is great and it is fun. Quackerz is a movie that is great for the entire family.

The graphics is great , voice acting and the storyline are fantastic.  I think this is one that will be watched over and over again in the future.

Quackerz will be available on DVD and Bluray on June 14th 2016.