The Legend of Tarzan On DVD/Bluray And Digital Copy Review 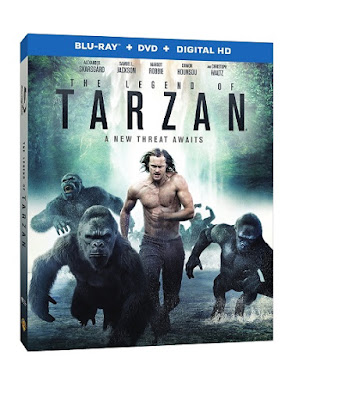 It has been years since the man once known as Tarzan (Skarsgård) left the jungles of Africa behind for a gentrified life as John Clayton, Lord Greystoke, with his beloved wife, Jane (Robbie) at his side. Now, he has been invited back to the Congo to serve as a trade emissary of Parliament, unaware that he is a pawn in a deadly convergence of greed and revenge, masterminded by the Belgian, Leon Rom (Waltz). But those behind the murderous plot have no idea what they are about to unleash.


Own The Legend of Tarzan on Blu-ray or DVD on October 11 or Own It Now on Digital HD!

I wanted to go see this in theaters months ago but I never got the chance to so I was happy to get the chance to review this movie . It is well done, the story is ok  but I had some parts I felt like I was losing interest and the acting is good.

I don't remember ever seeing any other Tarzan movies before and I haven't read the books so I can't really compare this movie to anything else.

The movie wasn't horrible but it wasn't the best I have seen lately either.

I don't know if I would ever watch this movie again but if you want to see this one I suggest you rent it first and then decide if it is a movie you would want to keep and watch again.