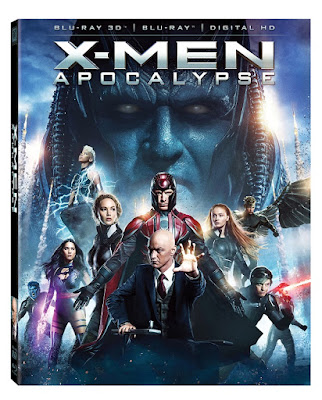 In “one of the coolest superhero movies of the decade” (Richard Roeper, Chicago Sun Times), Twentieth Century Fox Home Entertainment fights to save the world from a near “Apocalypse” in the suspenseful and wild film – X-Men Apocalypse. The most talked about X-Men film arrives on Digital HD on Sept. 9, 2016 and Blu-ray, 4K Ultra HD and DVD on Oct. 4, 2016.

X-Men Apocalypse reunites the fan-favorite trio of OSCAR® Winner Jennifer Lawrence* as Raven, Michael Fassbender as Magneto and James McAvoy as Professor Charles Xavier – who lead a powerhouse cast including Olivia Munn as the mesmerizing Psylocke, Sophie Turner as Jean Grey and Evan Peters as the comical Quicksilver.


In director Bryan Singer’s extraordinary follow-up to X-Men: Days of Future Past – Apocalypse – the world’s first and most powerful mutant – has awakened to find a world led by humans. Intent on cleansing the Earth of mankind, he recruits a group of mutants to create a new world order. In a desperate race to save humanity, Professor X (McAvoy) leads the young X-Men in an epic showdown – against an unstoppable enemy – that will determine the fate of the world.

Both my husband and I have been a big fan of the X-men movies so we were so very excited to see X-Men: Apocalypse .

We were not disappointed in this movie at all. It is so very well done and the story is fantastic. I have to admit I loved every minute of this movie .

If you are a fan of X-men like I am I think you will want to movie to add to your collection.

You can now purchase this movie online or in stores near you.
Posted by Chantale at Wednesday, October 19, 2016