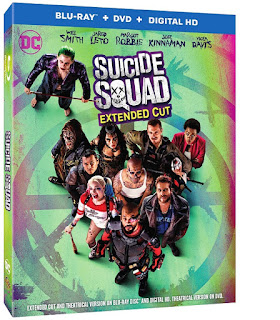 It feels good to be bad… Assemble a team of the world’s most dangerous, incarcerated Super Villains, provide them with the most powerful arsenal at the government’s disposal, and send them off on a mission to defeat an enigmatic, insuperable entity. U.S. intelligence officer Amanda Waller has determined only a secretly convened group of disparate, despicable individuals with next to nothing to lose will do. However, once they realize they weren’t picked to succeed but chosen for their patent culpability when they inevitably fail, will the Suicide Squad resolve to die trying, or decide it’s every man for himself?

Own Suicide Squad on Ultra HD Blu-ray Combo Pack, Blu-ray and DVD on December 13 or Own It Now on Digital HD!

I have seen this movie twice. Once in theater and once as soon as I received this movie on Blu-ray,DVD, and digital copy combo pack and I loved the movie both times I have seen it.

This movie does have its issues and for me, the main issue is that the trailers make it look like The Joker would have a bigger part in this movie. I so wanted to see more of him but unfortunately, we didn't.  I just hope we get to see more in the future.

I personally think all the actors did a great job.  I am a huge Harley Quinn fan and I think that Margot Robbie did a fantastic job.

I am very impressed with this movie and found it very entertaining.

I give this 4 out of 5 just because I wish The Joke had a bigger roll in this one.