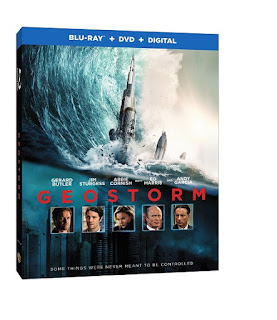 After an unprecedented series of natural disasters threatened the planet, the world’s leaders came together to create an intricate network of satellites to control the global climate and keep everyone safe.  But now, something has gone wrong—the system built to protect the Earth is attacking it, and it’s a race against the clock to uncover the real threat before a worldwide geostorm wipes out everything...and everyone along with it.

Geostorm is now available in stores.

I had high hopes for this movie because  Gerard Butler is in it and I have seen pretty much every single movie he is in and I have enjoyed most of them.

Anyway,  I watched the movie and I have to say I am disappointed. I was underwhelmed.

The story sounded good but it wasn't that good. I mean it is more like cheesy and there are some plot holes.

The graphics are great though .

Some people may like it but I personally give this one a 2 out of 5.