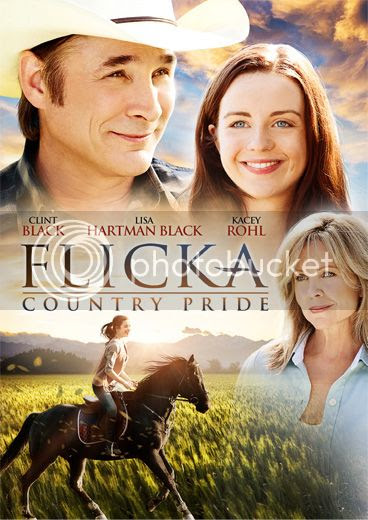 When Toby (Black) takes on a job at a stable with Flicka in tow, the owner's teenage daughter Kelly (Rohl), quickly bonds with the wild horse. A budding equestrian rider, she hopes to break Flicka for an upcoming competition, despite her mother's (Hartman Black) disapproval. With the competition approaching, a rival trainer stealing business, and a growing fear they may be forced to sell the stable, Toby steps in to turn things around for Kelly and her mother.

Grammy Award® Winner Clint Black is one of country music's superstars with over 20 million albums sold worldwide. Having written over 100+ songs including 23 #1 songs Clint is an active philanthropist overseeing numerous charities.

The Flicka: Country Pride Blu-ray and DVD has two behind-the-scenes featurettes on the making of the film and a never-before-seen music video. Available at 4,000 Walmart and Sam's Club locations nationwide and in Canada, both the Blu-ray and DVD are now available for pre-order exclusively at Walmart.com. Prebook is April 4.

I wasn't sure I would like this movie and actually I had never heard of it until just recently. I watched it this morning while snuggling on the sofa with my little dog . I am very impressed with this. Very well done and it kept my attention . This a great movie for the entire family to watch .

*The product(s) featured in this review were provided free of cost to me by the manufacturer or representing PR agency for the sole purpose of product testing. Opinions expressed are my own and are NOT influenced by monetary compensation*﻿ ﻿