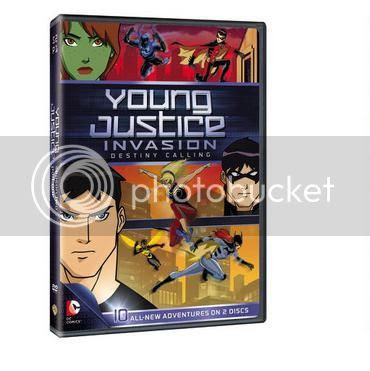 Join Young Justice and watch them battle villains and fight crime in a 2-disc 10 episode collection!

For the Young Justice squad being a teenager means proving yourself over and over — to peers, parents, teachers, mentors and, ultimately, to yourself. But what if you’re not just a normal teenager? What if you’re a teenage super hero? How much harder will it be to prove yourself in a world of super powers, super villains and super secrets? Are you ready to come of age in such a world? Are you ready for life or death rites of passage? Are you ready to join the ranks of the great heroes and prove you’re worthy of the Justice League? That’s exactly what the members of Young Justice — Robin, Aqualad, Kid Flash, Superboy, Miss Martian and Artemis — will find out … whether they have what it takes to be a proven hero.

The latest season of the critically acclaimed series jumps ahead in time 5 years to re-introduce the original squad as well as all new members Nightwing, Wondergirl, Blue Beetle, Batgirl, and Beast Boy as they fight off a secret alien invasion affecting the entire planet.

How many of you are fans of Young Justice? My husband and I are so every time I get asked to review Young Justice cartoons on DVD I jump on the chance to review it especially since we never get to watch it on television.

Anyways Young Justice Invasion: Destiny Calling season 2, part 1 is fantastic. We loved every episodes.These 10 episodes are very well done. Great graphics and sound quality is great. If you love the show I suggest you get this.

*The product(s) featured in this review were provided free of cost to me by the manufacturer or representing PR agency for the sole purpose of product testing. Opinions expressed are my own and are NOT influenced by monetary compensation.*
Posted by Chantale at Tuesday, January 29, 2013