Mr. Peabody and Sherman on blu-ray,DVD and digital HD Review 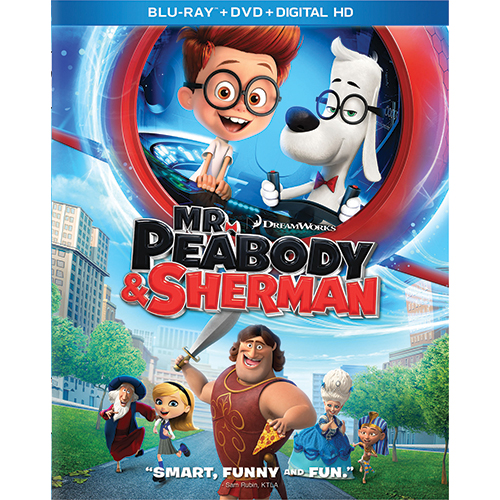 Mr. Peabody, the most accomplished dog in the world, and his mischievous boy Sherman, use their time machine - the WABAC - to go on the most outrageous adventures known to man or dog. But when Sherman takes the WABAC out for a joyride to impress his friend Penny, they accidentally rip a hole in the universe, wreaking havoc on the most important events in world history.  Before they forever alter the past, present and future, Mr. Peabody must come to their rescue, ultimately facing the most daunting challenge of any era:  figuring out how to be a parent. Together, the time traveling trio will make their mark on history.
MR. PEABODY & SHERMAN is an adventure-comedy featuring science fiction, time travel, outlandish characters and clever dialogue, all of which are bound together by the unexpected relationship between the titular heroes – a dog and his boy.

MR. PEABODY & SHERMAN is, at its heart, the story of the relationship between a father and his son. “Mr. Peabody adopted Sherman and raised him the best way he knows how,” explains the film’s director, Rob Minkoff, whose previous hits include the beloved animated film “The Lion King” and the live-action/CG animated “Stuart Little.” “Like with any family, things become complicated, so they both must grow and learn from their experiences and ultimately become an even better family.”
Even a world-class genius like Mr. Peabody will always have a lot to learn when it comes to parenting. “Mr. Peabody has to acknowledge that he doesn’t always completely understand his son,” adds producer Alex Schwartz. “Peabody discovers that giving up control is one of the greatest challenges one faces as a parent.”
Some of Mr. Peabody’s parenting lessons come via decidedly non-traditional child-rearing methods – like taking Sherman in a series of incredible adventures traveling across time. Time travel is a compelling notion that lends an intriguing dimension to an exciting, adventure-filled story. The film’s contemporary characters interact with equally entertaining famous figures from history – a dynamic that provides surprising fish out of water moments and myriad culture clashes.
Journeying across the eras also offers a host of rules that must be followed – like never meeting yourself and having as little impact on the past as possible.
Mr. Peabody and Sherman’s entrée to the infinite folds of history is a wondrous contraption called the WABAC, which is the singular creation of the world’s greatest inventor, Mr. Peabody. The perspicacious pooch built the device so Sherman could experience history up close and personal.
The WABAC is much more than a vehicle; it’s character in its own right, which becomes an integral player in Peabody and Sherman’s adventures through time.

I had heard of this movie and it did sound interesting so I couldn't wait to watch it.
I watched it on the weekend and I absolutely loved this movie. It is very well written, the graphics are fantastic and I think people from all ages will love this one.  It is fun and funny and I is great for family movie nights.

I highly recommend Mr. Peabody and Sherman and I give this 5 out of 5

If you want to purchase this movie, it is now available in stores.