The Longest Ride On Bluray Review 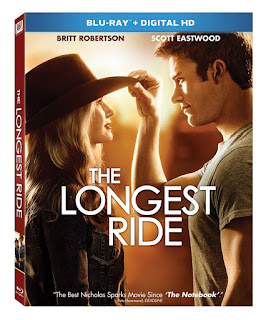 What would you do for the love of your life? Twentieth Century Fox Home Entertainment invites you to grab the bull by the horns in THE LONGEST RIDE, which releases on Blu-ray™ and DVD July 14. Up-and-coming stars Britt Robertson and Scott Eastwood will tug at your heartstrings as they bring Nicholas Sparks’ beloved novel to life.
Based on the bestselling novel by master storyteller Sparks, THE LONGEST RIDE centers on the star-crossed love affair between Luke, a former champion bull rider looking to make a comeback, and Sophia, a college student who is about to embark upon her dream job in New York City’s art world.  As conflicting paths and ideals test their relationship, Sophia and Luke make an unexpected connection with Ira, whose memories of his own decades-long romance with his beloved wife deeply inspire the young couple.  Spanning generations and two intertwining love stories, THE LONGEST RIDE explores the challenges and infinite rewards of enduring love.
THE LONGEST RIDE Blu-ray™ comes packed with 45 minutes of extra features that will take you further into the film’s two central love stories. Join Eastwood on the ranch as he learns from the world’s best bull riders to control the beasts and learn more about the production with audio commentary from director George Tillman, Jr. and star Oona Chaplin.
THE LONGEST RIDE BLU-RAY™ SPECIAL FEATURES

I am not usually a fan of Nicholas Sparks books or the movie adaptations but this one sounded interesting so I figured I would give this movie a shot.

I am glad I did because I really enjoyed it.  It is well done and ofcouse the acting was pretty good.  I just wish I didn't watch it when I am waiting for packages because I  ended up crying but lucky enough I watched this early enough that I didn't have to go to the door all teary eyed signing for anything.

Would I watch this again? Most likely at some point but not soon because I need to be in the mood to watch "girly" movies and that mood doesn't really happen that often.

Do I recommend this? Yes, especially if you enjoy movies like these.