Life Of The Party #review 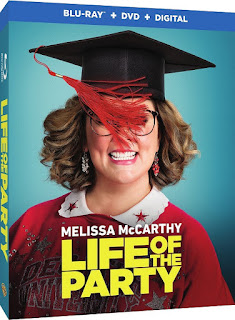 When her husband suddenly dumps her, longtime dedicated housewife Deanna (McCarthy) turns regret into reset by going back to college…landing in the same class and school as her daughter, who’s not entirely sold on the idea. Plunging headlong into the campus experience, the increasingly outspoken Deanna—now Dee Rock—embraces freedom, fun and frat boys on her own terms, finding her true self in a senior year no one ever expected.
BLU-RAY AND DVD ELEMENTS
“Life of the Party” Blu-ray Combo Pack contains the following special features:


Life of the Party is now available in stores.

When I first saw the trailer for this movie I knew I just had to watch it because it looked like it would be so funny and like something I would enjoy.

As you all may know by now, I am very picky when it comes to comedy and that I do not watch many anymore but I am so glad I decided to give this one a chance because omg!!  I found this one to be hilarious and so entertaining that the time flew by so fast while I was watching the movie.   This is one I will be watching again in the near future.

I do highly recommend.