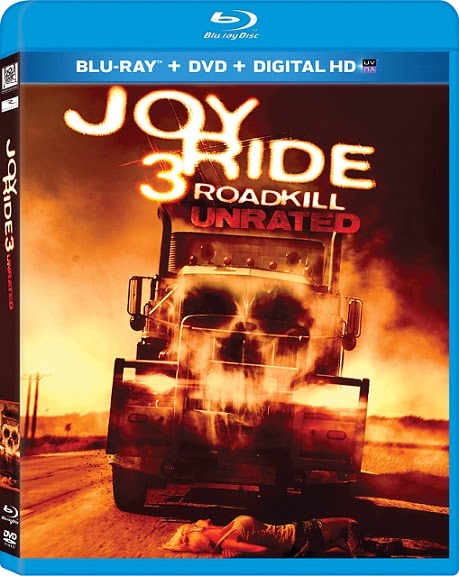 Rusty Nail is back to his old, truck-driving and murdering ways in the upcoming Joy Ride 3: Roadkill, available on Blu-ray and DVD June 17th. In celebration of Rusty’s return, we’re talking a look at some of the most “killer rides” to appear in horror films. If the headlights of one of these rides pull up behind you, don’t say you weren’t warned!

Rusty’s Big Rig from Joy Ride
Throughout the Joy Ride films, people seem to think messing with truckers over the CB radio is a good idea. While this may seem like fun on a long road trip, messing with guys who drive 10-ton behemoths probably isn’t the brightest of ideas. Rusty uses his truck to intimidate and chase after his victims, as well as occasionally murder them with it.

1958 Plymouth Fury from Christine
When Arnie purchased Christine, a beat-up Plymouth that he wanted to restore, he thought he had finally found a hobby that would allow him to escape from his personal troubles. Little did he know, the evil car had a mind of it’s own that would come to influence and control him. The car kills numerous people, and eventually leads to Arnie’s demise in the cult horror hit.

1941 Chevrolet COE from Jeepers Creepers
Perhaps one of the most terrifying vehicles all of film, the Chevy COE serves as the perfect ride for the flesh-eating creature that is after Darry and Trish Jenner in the 2001 horror classic. The vehicle has a ton of storage for all of the bodies of the creatures’ victims, as well as a super-charged engine that allows him to chase down anyone he wants. This rust colored beast isn’t easy to miss on the road - Just hope it doesn’t run you off of it!

1971 Chevy Nova and 1969 Dodge Charger from Death Proof
Stuntman Mike (Kurt Russell) uses his cars as his murder weapons in one of the entries in Quentin Tarantino & Robert Rodriguez’s horror feature, known as Grindhouse. The film features some of the most gruesome, over-the-top car crash deaths in movie history. You better stay out of this deranged stuntman’s way!

1973 Oldsmobile Delta 88 from Army Of Darkness


Burt Reynolds Oldsmobile from Army Of Darkness is the only vehicle on this list not driven by one of the “bad guys” in the film. Instead, it’s featured because it’s so iconic to the Evil Dead franchise, and because it’s transformed into an awesome, evil-fighting supercar in 1993’s Army Of Darkness. One interesting note, the contents in the trunk of the car that were seen in the film were actually items Sam Raimi had stored in the car, not product placement. Some of the items included shotgun shells, a hand saw, lots of rope, a gas tank, and a Chemistry 101 book by Bernard Garnell.

Enter for your chance to win 1 of 2 copies of Joy Ride 3 on Blu-Ray. US and Canada only