Scooby-Doo! Moon Monster Madness On DVD Review & Giveaway (US ONLY) 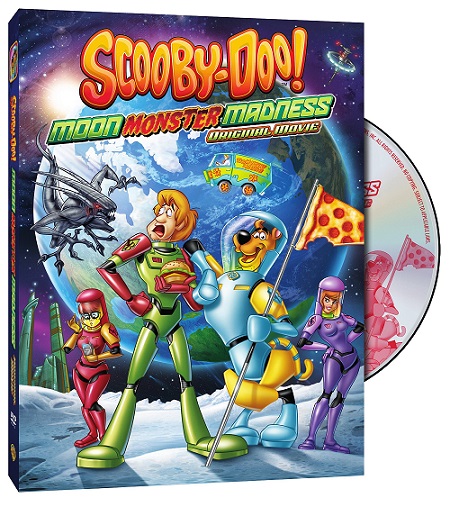 Zoinks! Get ready for some hilarious high jinks in outer space with Scooby-Doo! The lovable Great Dane is on a mission to deliver big laughs as he and the Mystery Incorporated gang take off on a super stellar adventure in Scooby-Doo! Moon Monster Madness, available in stores February 17, 2015. This all-new, feature length animated adventure will be sold on standard DVD, which retails for $19.98 SRP (DVD) and is available on Digital HD. Order due date for standard DVD is January 13, 2015.

Scooby-Doo! Moon Monster Madness will be available early through EST for download February 3, 2015.

It’s one giant step for dog-kind as Scooby-Doo and the gang blast off for an epic journey into outer space in this must-own, original, new film! After winning the last five seats in a lottery, Scooby-Doo, Shaggy, Fred, Daphne and Velma are off to space in billionaire Sly Barron’s brand new ship, the Sly Star One, a space tourism vessel setting off on its inaugural voyage. It’s all gravity-free fun until a mysterious alien begins to destroy the ship! As the vessel breaks down, the crew is forced to land on Sly Baron’s base – located on the dark side of the moon! Will the gang unravel this alien mystery? Will Scooby and Shaggy find snacks on the moon? Fans will want to hop on board, fasten their seat belts and journey to the outer limits with Scooby-Doo to find out!


·        Space Travel is Groovy! -- Join Mindy Cohn, the voice of “Velma,” as she introduces viewers to some of the real world technology and training that is part of modern space flight.

Well if you have been a long time read of my blog then you would already know how much I just love Scooby-Doo.  I loved the cartoons when I was a child and even now I still love Scooby-Doo cartoons.

Scooby-Doo! Moon Monster Madness is such a fantastic cartoon that Scooby-Doo fans of all ages will just absolutely love as much as I loved watching it.  It is very well done and the graphics, storyline and acting are all just fantastic.

I highly recommend this movie to everyone of all ages who just absolutely love Scooby-Doo.


a Rafflecopter giveaway
Posted by Chantale at Saturday, February 07, 2015