Fresh Off The Boat The Complete First Season on DVD Review 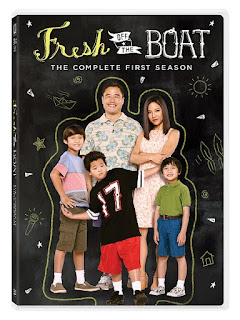 “Fresh Off The Boat” Season One
Join TV’s Funniest New Family and flashback to the 90’s! 12-year old hip-hop enthusiast Eddie Huang (Hudson Yang) and his family make their way from D.C.’s Chinatown to Orlando where his dad, Louis (Randall Park) tries to make his new steakhouse a success. His mom, Jessica (Constance Wu) aims to understand the culture clash and dominate suburbia. While his brothers fit right in, Eddie’s still tries to get a seat at the table – any table – in the school cafeteria. Bullies on the bus may get him down, but Eddie can bust a move and wield a fajita like nobody’s business! Go behind the scenes of this breakout sitcom inspired by renowned Chef Eddie Huang’s bestselling novel.

I had actually never even heard of this show before even though we do get the channel it plays on but I hadn't really watched that much television last year.

I wasn't really expecting liking this show at all since I am super picky when it comes to comedies and I actually don't like many comedies but I decided to give this show a try.

I watch the full season one in 2 days and I did enjoy the show and I did laugh a bit but I didn't find this should hilarious.

The acting was ok and story was good but I don't think this is a show I will watch every week. There are other shows on the same night and time slot that I want to watch more than this show.  Maybe if my other show is on reruns I will watch this to entertainment me.

I know a lot of people love this show but it just isn't something that I will be watching on tv this season.

Fresh Off The Boat season 1 is now available on dvd in stores near you.