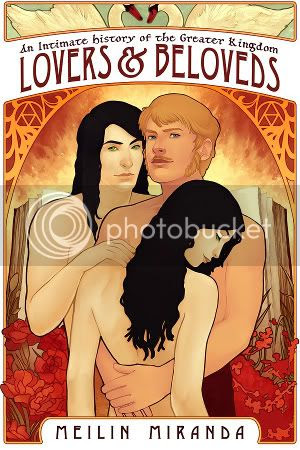 BETWEEN DUTY AND DESIRE

Over a thousand years, the Tremont family has conquered kingdom after kingdom, until it now rules the entire continent. The kingdom's magic is long forgotten, but its Gods are still remembered. Tremont is a kingdom on the cusp of an industrial revolution; trains and stem engines are new, and the Scholar Priests of Eddin's Temple make exciting discoveries daily.

Heir to the Tremontine throne, Temmin is a sheltered young Prince on the cusp of adulthood. Now that he's of age, he must leave his childhood home behind for a new life with his father--Harsin the Fourth, by the Grace of Pagg, King of the Greater Kingdom of Tremont and Litta, Emperor of Inchar.

King Harsin expects his son to become the kind of ruthless, pragmatic man he is. But the family's immortal advisor Teacher has other plans, and they involve a seductive set of twins, holy personifications of the Gods called the Lovers. Teacher intends to bind Temmin to a Temple devoted to eroticism; to bring him closer to his people; and to set him on a path that will lead ultimately to unimaginable glory for the House of Tremont--or its end.

The first book in this fantasy series with a sensual twist.

If you would like to buy this ebook you can so so at amazon.com or in MeiLin Miranda's website.


*I have received this ebook for free from the author and I was in no obligation to write a good review
Posted by Chantale at Friday, November 19, 2010