In a society where people's lives are increasingly shared with the world through avenues such as blogging and social media sites like Facebook, the microsharing trend is catching hold rapidly. Applications such as Twitter, Instagram and Vine are simply miniature versions of larger counterparts. So it's not surprising that audio clips have become the focus of the newest branch of microsharing under development. The Kapture Wristband is a concept with a goal to revolutionize the way we capture, share, and save the unexpected audio moments in people's lives. 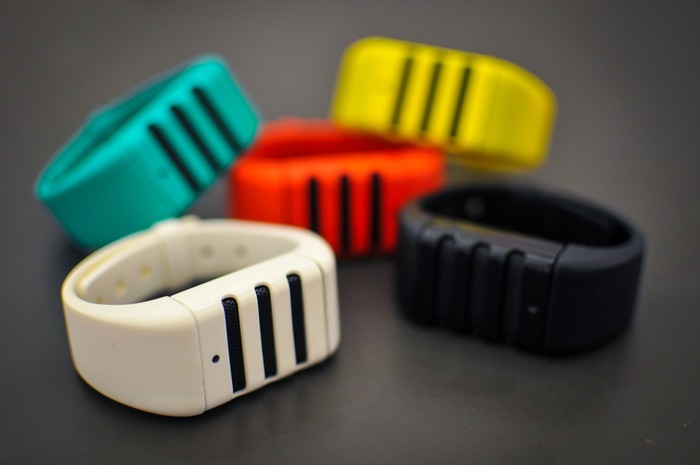 Similar to other micro platforms noted, the Kapture Wristband is set to capture a small audio segment. Tapping the top grille of the wristband causes the last buffered 60 seconds of surrounding audio to be saved and sent to an app on the wearer's phone. The Kapture Wristband's overt goal is not to create a stealthy, spy device that records the secret confessions of late night meetings on 76th Street, but to capture a short bit of unexpected audio and have it available to share. Unlike other similar apps, however, the wristband is constantly recording everything around the wearer creating a more intrusive element than the click of a smartphone shutter button.
While watching the product video, it's not difficult to see the many cool ways this product could be utilized. Unplanned wedding proposals can be quickly sent off to parents and friends. A baby's first mama or dada can be played back as proof in the inevitable debate between which was the first word spoken. The incredibly witty, or stupid, comment a friend popped out in a random conversation can be tapped and instantly the world laughs with them…or at them. This is where the ethical, and perhaps slightly creepy factor, comes into play.
Everyone around the person wearing the Kapture Wristband is being recorded continually and at anytime what they say can be clipped, saved and shared all without their knowledge. Moments of intimacy are not just joked about in high school locker rooms anymore but could be posted, tagged with the person's name and shared on Facebook. A person's random assurance of "yes, yes, I will give you the house since I cheated" has the possibility of ending up as Exhibit A in a divorce. A simple but devastating moment of personal rejection could end up misused to devastating effect. Now the developers of Kapture Wristbands are not responsible for instituting subversive recording or using social media to bully or humiliate people, and all these scenarios could conceivably take place with a smartphone and any one of 100s of apps.
Perhaps the key difference is that Kapture is designed, although it is questionable whether it pulls it off, to look like a trendy fashion accessory not a recording device. Furthermore, this device is marketed toward the young adult, as no one wearing business suitable attire or over the age of 25 is likely to be found wearing it. Given this, it's a rather safe bet that most high school or college age people can think of more ways to abuse this technology than use it for the good of others. So while to concept of the Kapture Wristband is a cool one, there are creepy overtones to its possible uses and the important stylistic issue of would the intended market really ever wear it--to which a small sampling of target age young men and women gave a resounding "not on your life."


John Chupon is an author and recognized authority on wristbands, currently working for Wristbands City which sells Tyvek, plastic, and custom wristbands.
Posted by Chantale at Wednesday, September 25, 2013