Excerpt and Giveaway: The Emblazoned Red by Dawn McCullough-White 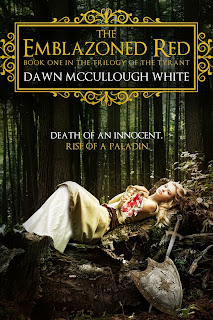 Once, in another world—a dark world, the world of Faetta—there lived paladins and pirates, tyrants and scallywags, vampires and the undead. In this world a revolution is brewing. The royalty of Sieunes are in chains, and those priests and paladins who follow the holy word of the gods are under attack. In the west, the kingdom of Kellerhald receives the fleeing priests in their temples of the paladins of Silvius, god of the Sky.
Here, a young woman has just passed her tests to become a paladin. A pirate crew raids along the Azez Sea. An undead creature, wielding great power, roams the graveyard of Yetta. And a lost soul, crying out from beyond the veil, seeks out a pure hearted warrior to hear its plea.
Amid the turmoil of the revolution, Ilka’s mettle is tested. Rescued by pirates, she ends up with an unlikely ally: the pirate captain himself. The newly trained paladin finds herself collaborating with the undead, working with a vampire, and worst of all, longing for revenge against the man who has ignited the revolution in Sieunes: Francois Mond...


"Death of an Innocent. Rise of a Paladin."
Excerpt:
"Beautiful Rhiannon ..." he sighed, and sank his fangs into her neck, pressing her body down onto the pile of dead flowers atop her son's grave.

He had been following her around the streets of Lockenwood for a good month.  He had begun following the moment he had caught sight of her lithe body and her bright red hair.  Sometimes he'd sit on top of a roof and just watch as she shopped or left work at night.  As he got more daring, he'd slip inside the tavern where she worked, losing himself in the hot, dirty crowd within.  His cold, hard body was shoved along through the crowd: peasants, villains, beggars.  The poor and the evildoers all jam-packed within the smoke-stained tavern.  And there was Rhiannon, fetching swill for each of them.

All of his efforts in the last month were now at their end.  They reached the final climax with her death.
Augustine released her limp form and laid her down to rest with her dead baby, and then he sighed because it had come too soon.  He had been longing to talk to her, that's where this generally went.  He wanted to get to know her a little before her inevitable death.  Wanted to know who she was, what she thought, and what she thought of him.  Perhaps he could've eased her sorrows for a time ... but then, of course, the lust for her blood would've gotten the better of him, and he'd have had to kill her.  But still, this was basically a wasted month
About the Author:

Dawn McCullough White is known for her strong female protagonists, and gritty dark fantasy.
Ms. McCullough-White has lived the majority of her life in and around Rochester, NY with a brief stint in Tucson, AZ. She is pursuing a degree in psychology at R.I.T. Dawn is a history buff and was a member of the Society of Creative Anachronism for years, active as a heavy weapons fighter. She currently resides with her husband and son in a quaint neighborhood next to an old cemetery.
Links:
Facebook: https://www.facebook.com/pages/Dawn-McCullough-White/125763474137312
Website: http://dawnmccullough-white.com/
;