EXODUS: GODS AND KINGS on Blu-ray and DVD 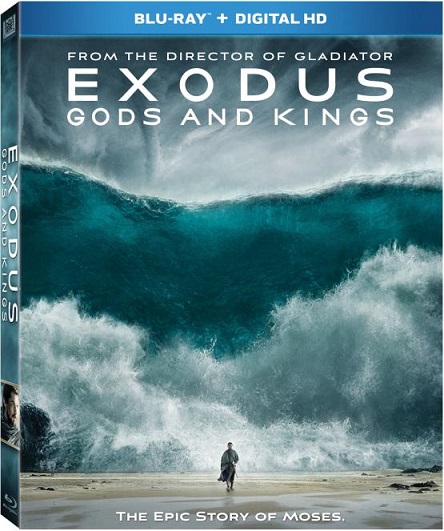 THE EPIC ADVENTURE IS BROUGHT TO LIFE

Visually-Stunning with incredible special effects from Director Ridley Scott on Blu-ray 3D™, Blu-ray™ and DVD March 17
More Than Five Hours of Special Features Available
On The Blu-ray 3D™ Collector’s Edition
LOS ANGELES, Calif. (January 30, 2015) –Twentieth Century Fox Home Entertainment tells the remarkable epic adventure of Moses in a spectacular display when EXODUS: GODS AND KINGS hits Blu-ray 3D™, Blu-ray™ and DVD March 17. Critically acclaimed performances from a brilliant ensemble cast, including Christian Bale, Joel Edgerton, Sigourney Weaver, Aaron Paul and Ben Kingsley, have helped catapult the film to nearly a quarter of a billion dollars in the worldwide box office1.
From Ridley Scott, the acclaimed director of Gladiator, comes the epic adventure EXODUS: GODS AND KINGS, the story of one man's daring courage to take on the might of an empire. Using state of the art visual effects and engrossing 3D immersion, EXODUS: GODS AND KINGS brings new life to the story of the defiant leader Moses as he rises up against the Egyptian Pharaoh Ramses, setting 400,000 slaves on a monumental journey to escape Egypt and its terrifying cycle of deadly plagues.
The EXODUS: GODS AND KINGS Blu-ray 3D™ Collector’s Edition comes with a cavalcade of bonus materials that will take you behind the scenes of the amazing retelling of the historical tale. The Keepers of the Covenant documentary explains how Ridley Scott brought ancient Egypt to life with hours of never-before-seen peeks at the film’s development.
Posted by Chantale at Wednesday, March 18, 2015