*This is not a compensated post. I purchased this product and am sharing my thoughts.*

Just about about a moth ago our 7 year old Samsung front loader stopped working.  I got a repair man come in to fix it . He thought maybe it was the pump or the motherboard  or something but after looking into it and those were not the problem.He told us that it could be something stuck inside  under the drum. So I asked how much it would cost to check and he said  that honestly it would be cheaper to buy a new washer .Also he had noticed that the rubber on the drum was chipped off so that would have to be changed as well so after thinking it over I decided it is best to just get a new washer.

I looked around online for good deals and I found the Samsung Washer (5.2 Cu. Ft.) WA45H7000AW/ was on sale for $699 at Leon's so we called them to see if they would also take the old washer off my hands and they said yes but it would cost $30.

Anyway,  my mom and I went to Leon's in the next afternoon and we looked at different washers. Since I had been washing laundry by hand for a little while I was sick of washing by hand and I wasn't really picky as to what I would get . All I knew was I wanted a top loader and if I could get one that I could fit my big King size comforter in it that would just be a bonus.  It  didn't take me long to  decide on the Samsung Washer (5.2 Cu. Ft.) WA45H7000AW/.    It is a top loader.

I liked that the sales person did not pressure me into buying  more things and he was very nice.  He told me they would call  later on that day to let me know when they will be delivering.  I asked to have them remove the old washer and they would do it for a fee which was $30.

At around 4pm someone from Leons called me to let me know they would be delivering my new washer the next day in the afternoon.

The next day the delivery people were here  in the afternoon.  They didn't connect the washer  but their policy on Leon's website that they didn't set up washers but that was fine since it isn't difficult to  connect everything.

Now about the washer.

I didn't use it on the day it was delivered but I used it a lot on the next day.  I washed a few loads of clothing and I love how the settings are simple and that the clothes were pretty much just damp when the loads of wash were done so it didn't take long to dry . Unlike my old washer.. Before it died on me most of the clothes were still soaked and I had to either put it in for spin longer or put in the dryer for longer.

I love this washer . It is big enough to wash our big king size comforter.

It is very quiet and when your washing is done the washer plays a little tune. Which I like because I like knowing when my laundry is done.

Here are a few photos of the washer: 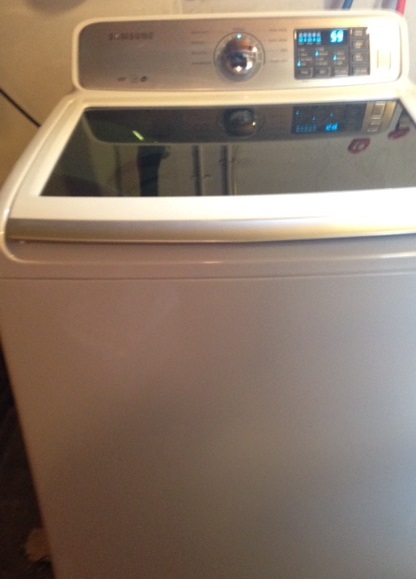 I think most new washers have this setting but this washer has a SelfClean setting .It notifies me after 40 washes that it is time to clean the washer.   How cool is that?

After about a month of owning this Samsung washer and about 15 loads of laundry I have to say I am very happy with this washer.  I am so happy I picked that one.